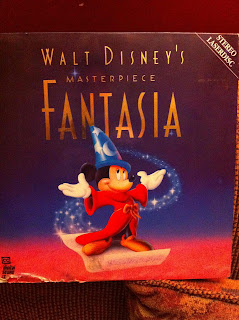 For those of you that don't take part in the weekly Saturday morning ritual known as yard saling, you may not know the staples that seem to be on everyone's lawn.  Without fail, there's always old books, usually old bestsellers and self-help guides, but sometimes a few hidden gems (I found Harlan Ellison's The Book of Ellison* under some children's books at a church rummage sale a few weeks back).  Glass vases and other faded knick-knacks are also present, plastered with bright orange and pink stickers that say 25 cents or 1 dollar.  Used toys and baby clothes are regularly on display, with young mothers sometimes having whole tables covered in miniature one-piece sundresses, tiny winter jackets and blue corduroy overalls.  Sometimes even used tools or dusty electronics equipment (think old tube TVs) make it out there, if the man (or woman) of the house is feeling ambitious.
The one item that's almost always there is the milk crate full of old, worn record albums.  Rarely is there a time when I don't flip through the stacks, although it's usually mostly junk (everyone likes Neil Diamond and Fleetwood Mac, it seems).  Sometimes, however, the stack surprises you.  That was my experience last weekend when I wandered over to that familiar bin and noticed it was full of something I didn't expect...laserdiscs.
For those that are unfamiliar, the laserdisc was the first optical disc video format commercially available in the US (1978)**. Competing with other home video formats of the time (Betamax and VHS), it offered almost double the resolution of tape (420 vs. 250 lines) with unique features like random access, slow motion and freeze frame.  Unfortunately, the disc's unwieldy size (nearly 12" in diameter, 3x that of a CD), expensive media, limited retail support and lack of recording ability doomed the format.  Perhaps the initial name, DiscoVision, didn't help matters, either.  Whatever the case, laserdisc was not a commercial success (at least here in the states), but it proved to be an effective catalyst for the burgeoning niche market of home theater enthusiasts (there was no such thing before laserdisc). Further, movie extras now common place on DVD and Blu-Ray (e.g. trailers, deleted scenes, production artwork and director's commentaries) first appeared on laserdiscs.
As a fan of old, defunct technologies, I happen to have a laserdisc player.  That box of laserdiscs was full of treasures (Criterion collector versions of Snow White, 2001: A Space Odyssey, Dracula and Ghostbusters), so it's little surprise that I bought everything they had ($15 for the lot).  After a quick trip up the attic steps to retrieve the player, and another five minutes hooking it up to the 42" plasma, I've been watching the movies ever since.  I'll cover the Criterion discs in a later post, but I wanted to mention my experience with the first movie I watched, Fantasia.  A stereo extended play release, it doesn't have all the bells and whistles of the later deluxe CAV version, but it does have Dolby digital surround sound.  I mention this because the audio mix was superb, much better than I expected.  If you haven't seen Fantasia, it's chock full of classical masterpieces (Bach, Tchaikovsky, Stravinsky, Beethoven and Schubert all make appearances) that provide dramatic background for the stunning animation which can only be described as ahead of its time.  The letterbox picture was warm and muted (hallmarks of an analog transfer), so detail was not razor sharp as it is in high definition playback. There was also a fair amount of crosstalk (laserdiscs tracks were layered in such a way that artifacts from one would be visible in another).  That said, it was still a treat to watch and listen to the movie in this format.  I didn't even mind flipping/changing the discs every forty minutes or so (a necessity with my player).   I look forward to checking out the other discs.
*If you're not an avid reader of science fiction, the name Harlan Ellison may not mean a whole lot.  If you are acquainted with any of his over 1000 works of fiction and non-fiction, however (from short stories to teleplays), you'll know he is a prominent figure in the genre.  Ironic to this post, he was once hired as a writer for Walt Disney Studios but was let go after just one day (he was caught aimlessly wandering the halls, tightening loose screws with a screwdriver).
**When laserdisc first went on sale in a few Atlanta test stores on December 15th, 1978 (known back then as MCA DiscoVision), the first title available (and the one used to demo the system) was Jaws.
Posted by ThomasLeeYork at 7:23 PM