Because I mentioned it on Friday, I thought it would be appropriate to post pictures of the Neo-Geo MVS arcade cabinet currently standing next to my closet.  To say it dwarves the 8x10 room that houses it would be an understatement; clearly the game's designers did not anticipate future owners would look to store it in a spare bedroom.

For those that are curious, the model is MVS-1-25, a pretty standard two-player US jamma cabinet with a 25" monitor and a single slot MV-1F PCB board.  I won't belabor the specifics further: check out the hardMVS site for a wealth of good information on SNK cabinets, including photos, manuals, project ideas, flyers, etc.  If you're new to MVS hardware (as I was), it's best to start with the FAQ.  In the meanwhile, here's a quick rundown on the terms to know:


SNK Playmore - Japanese hardware/software Company responsible for the Neo Geo family of video game systems, including the coin-op MVS, home console AES and short-lived portables Neo Geo Pocket and Pocket Color. The initials stand for Shin Nihon Kikaku, which is Japanese for 'New Japan Project'.
PCB - Printed Circuit Board; in this case, the arcade logic board (or brain) of the cabinet.
MVS - Multi-Video System- unique to Neo Geo, this technology let arcade owners install up to six different games into one cabinet through the use of rom-based cartridge slots on the PCB.
AES - A home version of the MVS, the Neo Geo Advanced Entertainment System provided users a way to play their favorite arcade games at home, albeit at a hefty price tag ($599 for the original console and $200+ per game.)  Although the system was a 24-bit graphical powerhouse with a respectable library of hits, it failed to gain traction with US consumers (likely due to cost).
It’s interesting to note that although the ROM chips were identical, MVS and AES cartridges are not interchangeable.  This was done to prevent people from purchasing the cheaper arcade carts for use in their home systems.
JAMMA - Japan Arcade Machine Manufacturers' Association - a trade association made up of the big names in Japanese arcade entertainment (e.g. Sega, Capcom, Konami, Namco, etc.).  They developed an industry standard for wiring arcade cabinets to facillitate easy swapping of new games into old machines.
Previously, arcade components were custom-built, making it difficult to re-use cabinets if a game was unpopular. The Jamma 56-pin connector essentially made arcade machines 'plug-and-play'; simply swap the circuit board and artwork, and you would have a whole new game to entice customers.  To provide a home console analogy, this would be the equivalent of Sony, Microsoft and Nintendo all agreeing to use the same peripherals for their systems. 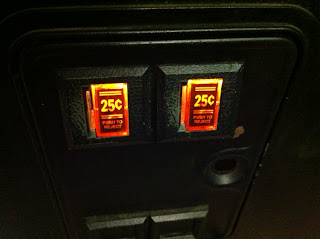 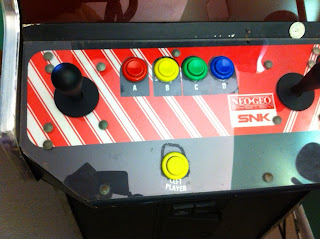 Posted by ThomasLeeYork at 8:26 PM