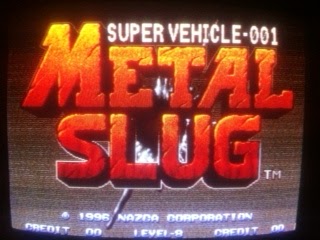 Although the traditional brick-and-mortar book store is going the way of the dodo, I still visit them once a month to grab copies of the latest British video game magazines. With overseas subscriptions costing $100 or more, it's still the only reasonable way* to snag copies of Edge or the charmingly retro Retro Gamer . My particular bookstore (which shall remain nameless, but starts with a 'B' and ends with 'arnes and Noble') is usually a month behind the current issues, so I just picked up issue 98 of Retro Gamer; to my surprise, the cover story is on the genesis of Metal Slug, SNK Playmore's 1996 run-and-gun masterpiece.
For those that aren't familiar, 'run and gun' is shorthand for a side-scrolling, sprite-based, 2D action game (think Konami's Contra).  An offshoot of the shoot 'em up (or shmup) video game genre, run and gun games share a lot of the same characteristics with their ‘bullet hell’ brethren: an overload of on-screen enemies; linear game stages with progressively harder obstacles and bosses; power-ups that increase weapon range and resistance; a screen that scrolls (left-to-right in this case). Unlike traditional shooters, however, run and gun games feature human characters (in lieu of ships or vehicles) and include some basic platforming.
Metal Slug is a late entry to the run and gun arena, when US arcade popularity was waning.  The focus had turned to home consoles like the Sony PlayStation and Nintendo 64 and their rich, three-dimensional environments (e.g. Tomb Raider, Super Mario 64).  Although Metal Slug's arcade-based SNK roots ensured its initial home release would be limited to the ill-fated (and prohibitively expensive) Neo-Geo console, Metal Slug would never-the-less become a hit and eventually spawn a dozen sequels for nearly as many consoles. Itself a hybrid of the genre (sections of the game involve piloting a tank-like vehicle called a slug), Metal Slug is best known for its rich, colorful backgrounds (divided into thirds for added depth) along with excellent sound and character animations (which are over-the-top funny).
Late last year, I scored a Neo-Geo arcade machine on Craigslist (pre-loaded with Metal Slug). Along with Aero Fighters 3 (another classic shmup) and the King of Fighters series, Metal Slug is one of my all-time favorite Neo-Geo games.  In honor of the article, my plan this weekend is to dust off the old cabinet and give the game another go.  For those of you that don't have space for a full-size arcade cabinet in your house, see if you can snag a copy of SNK Arcade Classics Vol. 1 (Wii, PS2 or PSP).  You can also download the game from the Wii Virtual Console.  Either way, you won't be disappointed.
(*I know there's an iPad app available to download the digital versions of Retro Gamer and Edge at half the price, but I've yet to try it).
Posted by ThomasLeeYork at 6:26 PM