For the uninitiated, your local Target store* can be a mecca for clearance electronics, toys and video games.  Just walk in and check the end-caps of various aisles for items with a red, rectangular clearance tag.  The savings can be significant (sometimes 50% or better) and the prices trend uniformly, meaning an item priced @$3.48 at one store could be available for the same price at another.  Unfortunately, availability and location factor into it, so a high volume store with a middle/high income demographic will move more merchandise, and as a result, discount their surplus inventory less frequently.

In the deal world, this is known as YMMV - Your Mileage May Vary, and the results can be often hit or miss.  At minimum, it adds a level of excitement to the normal, mundane shopping experience (when was the last time you were excited to pick up kitty litter?).
I mention this because I had moment of weakness on Sunday night when my wife and I stopped into Target just minutes before the Super Bowl to pick up said kitty litter and a few last minute snack food items.  Target tends to discount merchandise at predictable times, often seasonally or after major holidays; it's easy to pick up old Valentine's Day candy or a snow shovel come spring. For the items I care about, however, it's harder to predict when the prices will ultimately fall.

I should have known the impending release of Star Wars Episode I: the Phantom Menace 3D would be accompanied by a boatload of new toys (the real money for the franchise has always been in merchandising). To make shelf space, Target did something they rarely do: discount Star Wars toys (heavily). I'm not exactly sure what happened after I spotted the end cap, but I do know our cart was soon full of 3 3/4" action figures. 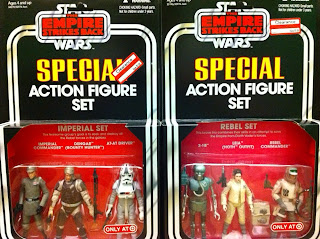 Target is a 'big-box' retailer in the US, so it's not uncommon for toy manufacturers like Hasbro to create retail-only 'exclusives' for the chain**.  One such exclusive was the Special Action Figure Set, a box of 3 Star Wars figures with retro-styled packaging reminiscent of a similar offering by Kenner Toys in the early 80's. I've seen them on the shelf for a while now, and although I loved the classic look, I felt the asking price was a little high.  At 50% off, however, I quickly snatched them up without thinking twice, along with a handful of carded Clone Wars figures. 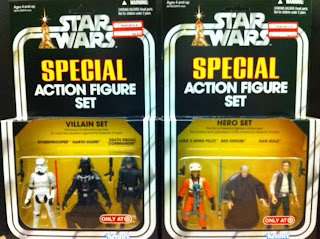 Now I'm faced with the dilemma over where to store them.  Since the renovation, the back wall of my closet has slots for 12" hooks to hang toys from.  It certainly looks cool, but the problem is one of real estate; I have 3 dozen figures hanging up already without an inch to spare.  Do I remove the handful of Avatar toys I bought when the movie finally left theaters?   What about the two rows of Indiana Jones figures hanging idly (check out  this fascinating article on The Robot's Pajamas for reasons why the toys didn't take off)?
Roughly nine months ago, I scored my biggest yard sale haul to date, which in effect prompted the creation of this blog.  In the lot were 50+ carded action figures, primarily Toy Biz and MacFarlane, dating from the early to mid ‘90s.  Although I have for soft spot for Toy Biz (particularly X-Men series 1 & 2), it soon became clear I had no place to store so many toys (except maybe the attic).  Considering that a fate worth than death, I listed and sold the lot on EBay for about what I paid for it.  With only a handful of vintage and re-issued Star Wars toys left over, I felt confident there was room in the new closet to grow.
That brings us to today.  While I can't foresee selling any more Star Wars toys (I've already made that mistake three times in my life), it looks like one of the other franchises will have to give up their shelf space.  I guess I’ll caulk this up as one of the perils of collecting Star Wars merchandise; George (Lucas) will always find new ways for us to spend our hard-earned money. Once I get everything re-organized, I'll have to show you pictures of the closet.  Until then...
*I say local, but I realize this blog is available worldwide (where Targets aren't). I also want to apologize to Vermonters.

**Target may be the 'exclusive' retailer for these toys in the US, but Hasbro released them to vendors in other countries.  Here's an example of a shop in Kuala Lumpur, Malaysia .

Posted by ThomasLeeYork at 3:02 PM